With Summer slowly creeping up on us, bikers are getting out in full force!
I decided today to Take the National Bike Challenge!
I'm recording my bike travel through the end of September to help People for Bikes record data about actual bike usage. Here's the address if you want to join, too!
http://nationalbikechallenge.org
And for all you Richmonders out there, check out Sports Backers site with their May Events calendar! Many different rides are planned and they have meeting dates listed as well.
Bike Month RVA 2015 - events calendar
http://www.sportsbackers.org/program/bike-walk-rva/bike-month-rva-2015/

Happy biking!
Posted by Unknown at 4:33 PM No comments:

so, it's been ten years that i've been counting backwards on birthdays. at 32 (again), i'm convinced my plan is working! i'm lucky to be a happy and healthy person and hope it continues that way for some time.
i realize that the past month or so has been too busy. so many projects coming to a head at the same time. where it's affected me the most is in not feeling like i have the time to ride my bike. this sucks in so many ways! and i've been unable to get to work in my studio for several weeks now, too.
but tonight, i decided to be nice to myself and ride in to work. so glad i did! i need to try to be less of a control freak and seek assistance where i can. i think this would help me free up time and get my  schedule back to where i want it.
so to wrap up what i've been up to recently since the end of exquisite abnormalities on november 23, we finished up artroulette with the raffle drawing on november 28 - lots of fun with Harry Kollatz being nutty - then the opening reception for the members' biennial, artroulette take down, and contacting and distributing work to the winners, patching the hallways, planning gov. board and members meetings for artspace, setting up holiday party, finalizing annual fund raising letter for artspace and getting it in the mail.
the indiegogo campaign for the doodlists did really great, just under $1500 for the exhibition. i've been working on getting the perks printed and now that they have arrived, i need to pack them up and distribute them. i already did a day-long demonstration of elaborate doodles at liberty high in bealton, va. thanks to buddy terrell for recommending me to gary colson. he was great to work with and i found out that he knows the paget brothers, ben and charlie!
i still have to finish up a proposal i've been working on with tara morand, update and print the members handbook for artspace and create a FAQ for our gallery sitters. then, maybe i will have time to create some more pieces for the doodlists show opening april 24, 2015!
it seems like too much stuff to handle, but somehow i know that work will expand or contract to fill the time i have to do it in. i think i'm afraid to be bored for too long. but it's been so long since that has occurred, i can't even remember what it feels like.
Posted by Unknown at 4:38 PM No comments:

What a busy Summer and Fall! I am still in the middle of a bunch of projects, but things are progressing. artroulette collaborations have been on display in the Plant Zero Project Space Hallway Galleries since the opening on October 24th. Things went smoother than I expected. Most of the artists seemed to enjoy themselves and all the teams created something wonderful!

The raffle drawing will be held on Friday, November 28 starting at 6pm. Harry Kollatz Jr. is hosting the event. Kollatz will select 25 raffle tickets and assist in the spinning of the wheel of fortune to determine which collaborative artwork has been won.

Check out the webpage for images of all the pieces that were created:
http://artspacegallery.org/artroulette/index.shtml


Opening the same night, "Exquisite Abnormalities" was wonderfully attended. I sold "Desirable Catch" to Jennifer Kirby of Crossroads Art Center. She said it reminded her of being in Greece. Thanks, Jenni! I'm looking forward to our artist talk on November 23rd, 2pm. I will be joined by Jessica Sims and Roman Zelgatas.


The next show I will be in will be the artspace Members' Biennial. I have one large piece that I have been working on and would really like to finish it if possible before the opening on November 28th. I have been posting updates on it's progress on instagram and facebook.


I've also been working on an Indiegogo campaign for "The Doodlists" art exhibition at artspace next Spring. The campaign went live on Halloween and I it is set to end on December 2nd. So far, we've collected 14% of our goal, but I think things are started to get heated up. I'm optimistic that we will reach or exceed our goal! Please check out the campaign page below to contribute or share! 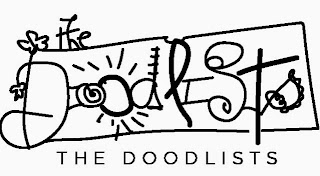 Posted by Unknown at 8:58 AM No comments:

The Summer has found me getting busier every day -- ideas are flowing and I'm making and showing a lot of art right now.

I have an artist reception planned for this Friday, August 1, at 9WG Studios. The pieces being exhibited at 9WG studios from July 1 through August 29, 2014, were previously shown as a group at artspace, Zero E. 4th St., Richmond, VA 23224. That show was titled "Altered Perceptions," and was on view from March 23-April 22, 2012. This group of paintings have not been seen together since that time. See the facebook invite for more details:

I'm working on 2 new 60x54 inch pieces, started on June 24th. I've gotten them both to the point where the sharpie patterns and details are emerging along with several layers of acrylic color washes. I was also able to finish naming the 5 remaining of 10, 14x11 pieces mentioned previously and included them on my new instagram account (#finishedwork, #newwork, #elaboratedoodle, #sharpieandacrylic)  along with the two pieces in progress (#workinprogress, #20140624A, #20140624b).

In mid-July, I was elected for a second term as President of artspace gallery, Richmond, VA. I'm trying to get re-acquainted with the gallery's operations and hoping to use technology more to streamline our processes. My ultimate goal it to help artspace become more efficient and effective in meeting its mission and objectives as a non profit gallery for the visual and performing arts.

This year, I had been getting more involved with the gallery again after a multi-year hiatus as an on-leave artist member of artspace. I had gone on-leave to re-charge but became an active member again in January. Being able to step away from the day-to-day operations for a while I think gave me insight into the office of President and the gallery itself.

Even before I became President again, I was starting to get more involved. I have been planning a new fundraising project called artroulette. I'm hoping it will be a successful event for the gallery and make lots of money! The project involves randomly assigning 100 preselected artists to 25 teams of 4. These teams then have one month to make collaborative artwork(s) that the gallery will raffle off in November after a one month display in the Plant Zero Hallway Galleries. Visit the webpage:
artroulette, take a chance on artspace!

artroulette has been a lot of fun planning and organizing. I really enjoyed filming a video promotional piece with participant, Gwenyth Gaba. We had various artist participants dress up as famous artists from the past and put them together in random combinations. It was a lot of fun making it and it's fun to watch as well!

The artwork of artroulette will go on view October 24, 2014 and will stay up in the PZ galleries until November 28, when the raffle drawing will take place. There will be 25 winners of collaborative artwork!

Also on October 24, I have another show opening in artspace that I have been planning for about a year. "Exquisite Abnormalities" features my work alongside Dee Glazer in the Main Gallery, Jessica L. Sims showing in the Frablel Gallery, Roman Zelgatas in smallspace, and my own collaborative endeavors will be in the Helena Davis Galleries in "Artist Conspiracies."

Next year promises to be just about as busy as this one. I already have a group show planned for April/May featuring at least 12 artists whose work features the use of doodling. "The Doodlists" aims to elevate the doodle to a higher status in the world of fine art. There is a good chance we will be doing an Indiegogo campaign to support this exhibition. If so, we will be offering a lot of cool perks, so keep your eyes open for it!

Still in the planning stages, I am working on a multi-media installation with friend and artist, Tara Morand. The installation will be based on a painting I did a few years ago while focusing on the concept of pareidolia. We hope to have a presentation ready to submit to a few different galleries by this coming Fall.

Posted by Unknown at 2:35 PM No comments:

This Summer, you have a bunch opportunities to view some of my work, both old and new!

At artspace this month through July 20, I have two pieces in the Suzanne Foley gallery. "Chainmail Warrior" and "Woodland Frolic" are featured in "The Fit and the Finish: size, surface and substance."

I have two pieces are on view at the Capital One, Chester campus in "artspace Speaks" through September, 2014: "Quantum Brew" and "Cetacean Camoflage."

Why I hate Sharrows!

I hate sharrow markings. They don't do anything except tell people what they should already know.

In the state of Virginia, bikes are allowed to ride on roads, except highways, with the same rules as cars. They are a waste of money and paint and they give some bikers the idea that they have special privileges in these lanes, potentially putting them at risk. Cars basically ignore them and many times they are placed in lanes that have parked cars in them.

Additionally, in areas where there are right turn only lanes, the sharrow puts bikers in the middle lane. This is due to a State law that says bikes can't travel in these lanes. But without a protected lane and some kind of signage, the biker is left to fend for themselves between lanes of traffic. Sometimes these turn only lanes are on/off ramps for highways. Motorists are typically much more aggressive when they have to deal with entering or exiting a highway.

To illustrate what I mean, here is a video I put together illustrating my commute on the Boulevard in Richmond, VA.

Posted by Unknown at 2:05 PM No comments:

The latest batch of paintings

I've been working on 10 paintings recently that I began at the workshop I held at the Visual Art Studio recently. I finished and signed 5 of them last week. Still need titles, so if you have suggestions, let me know!! 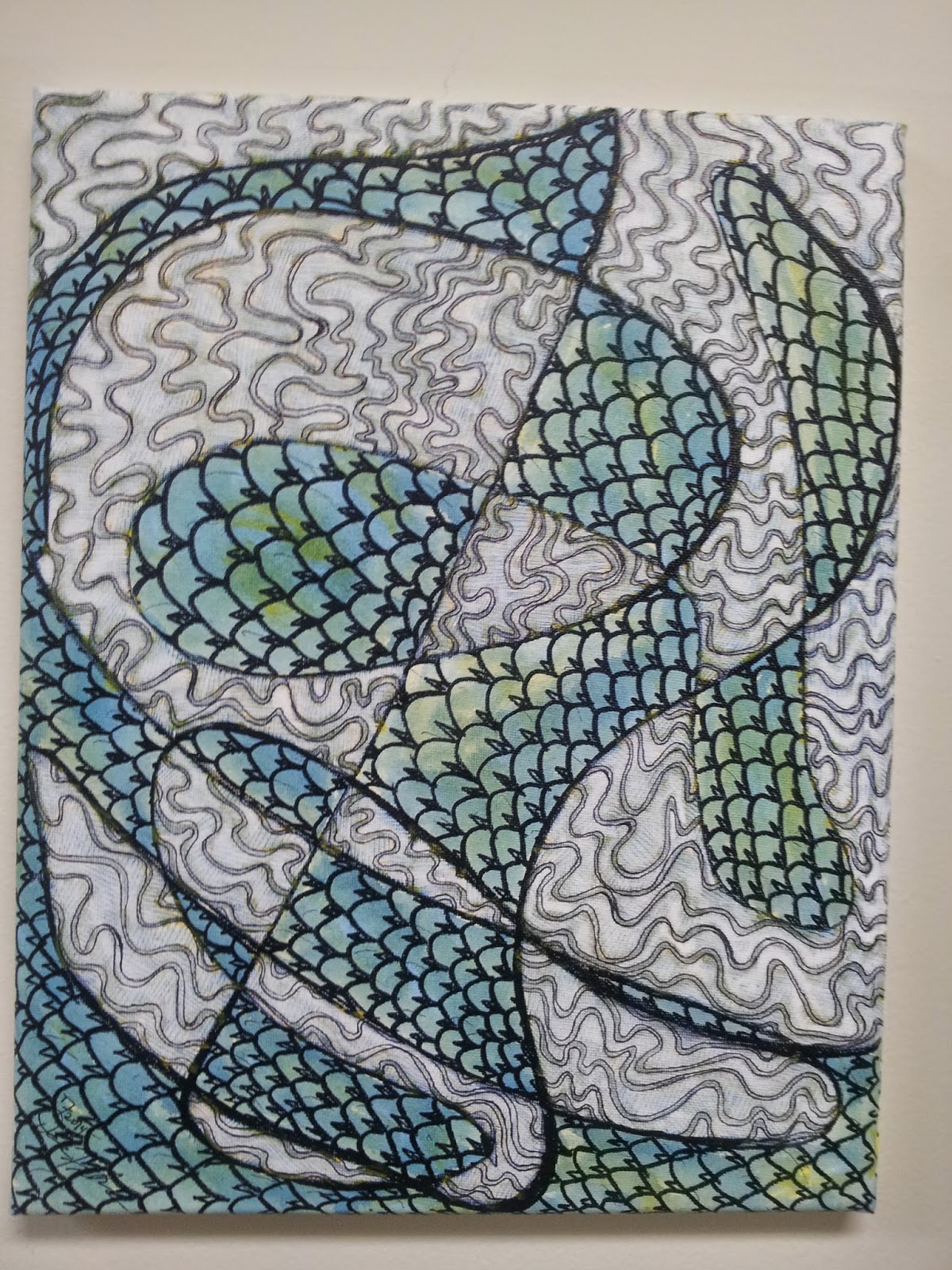 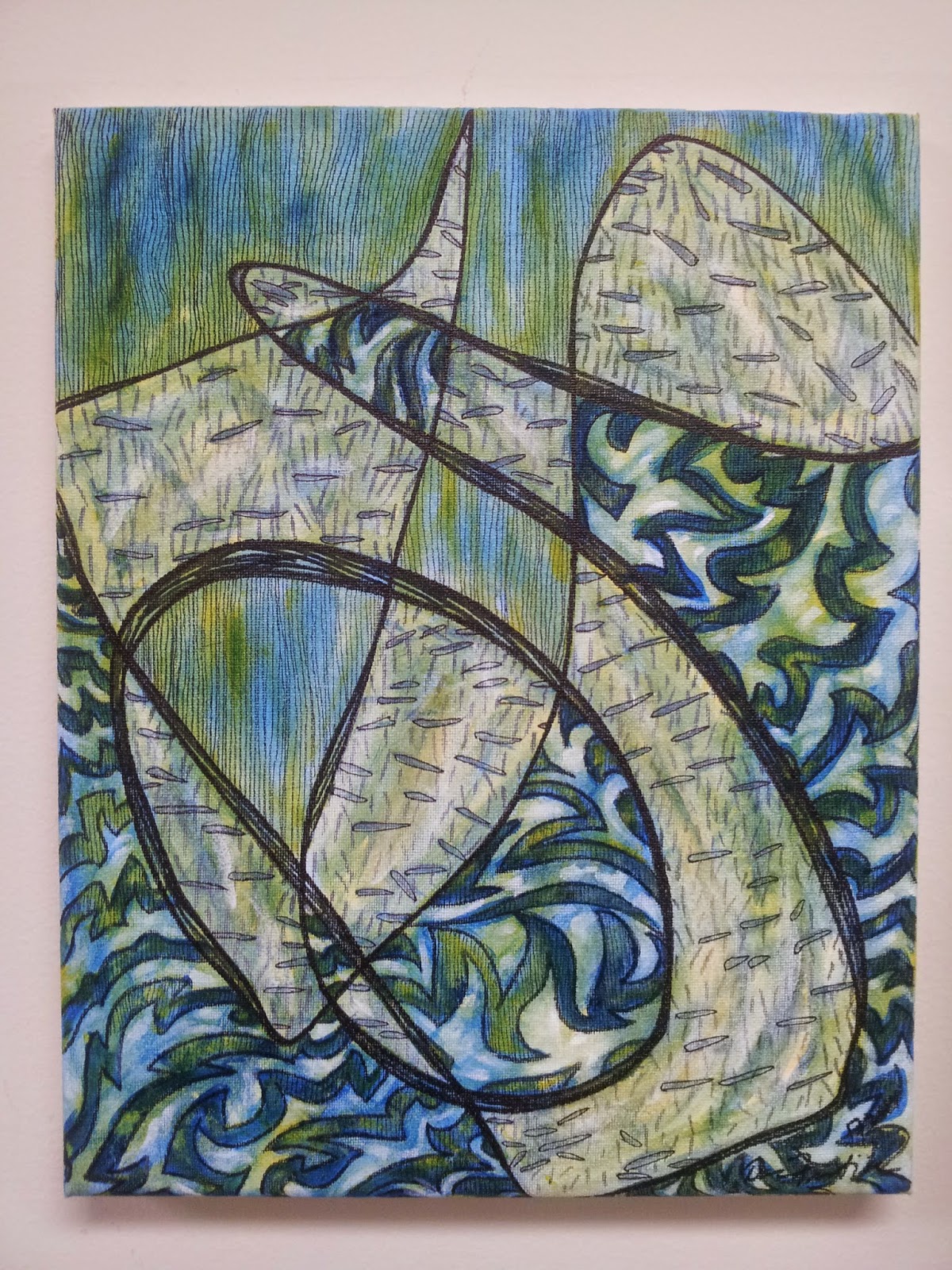 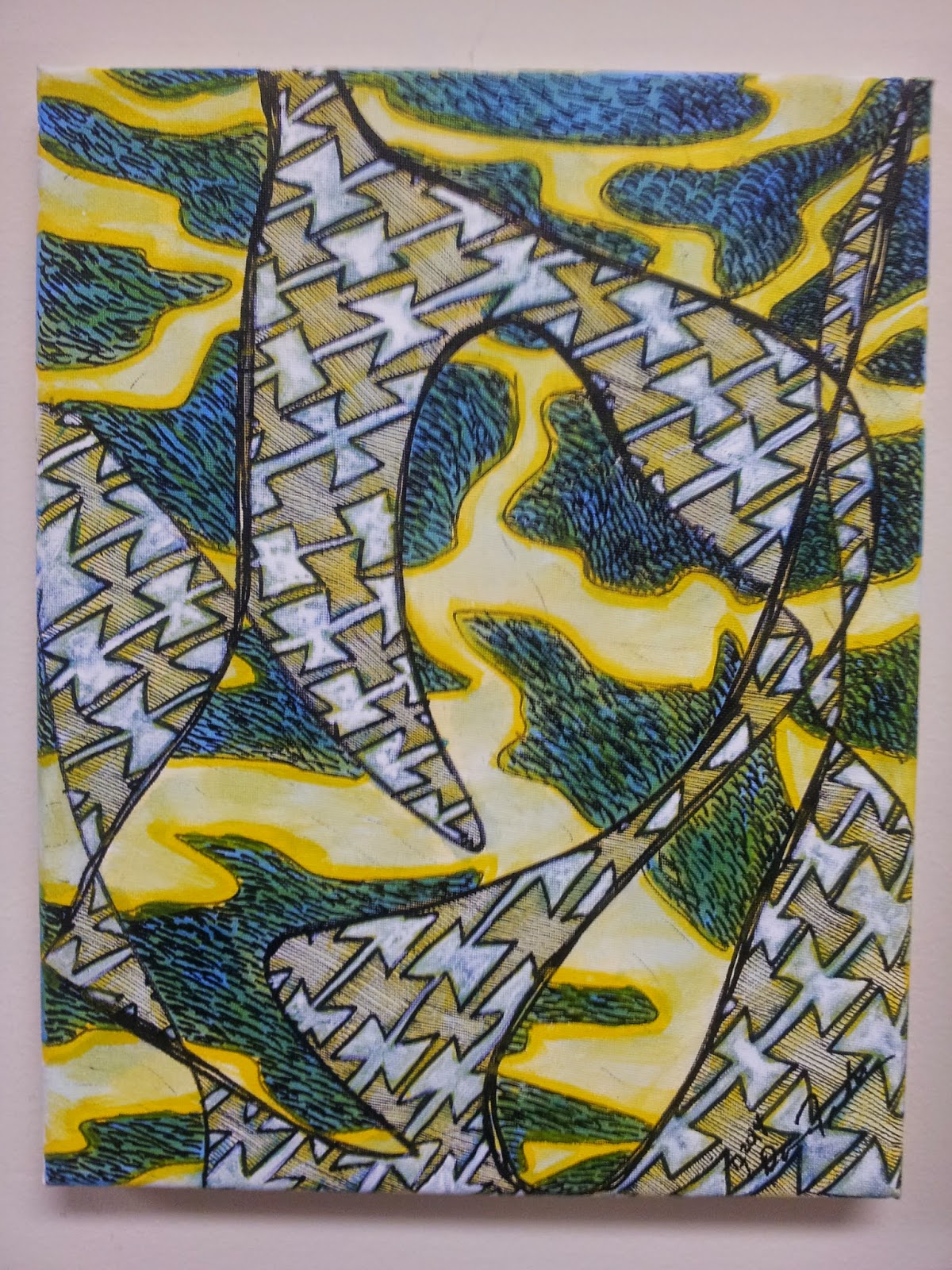 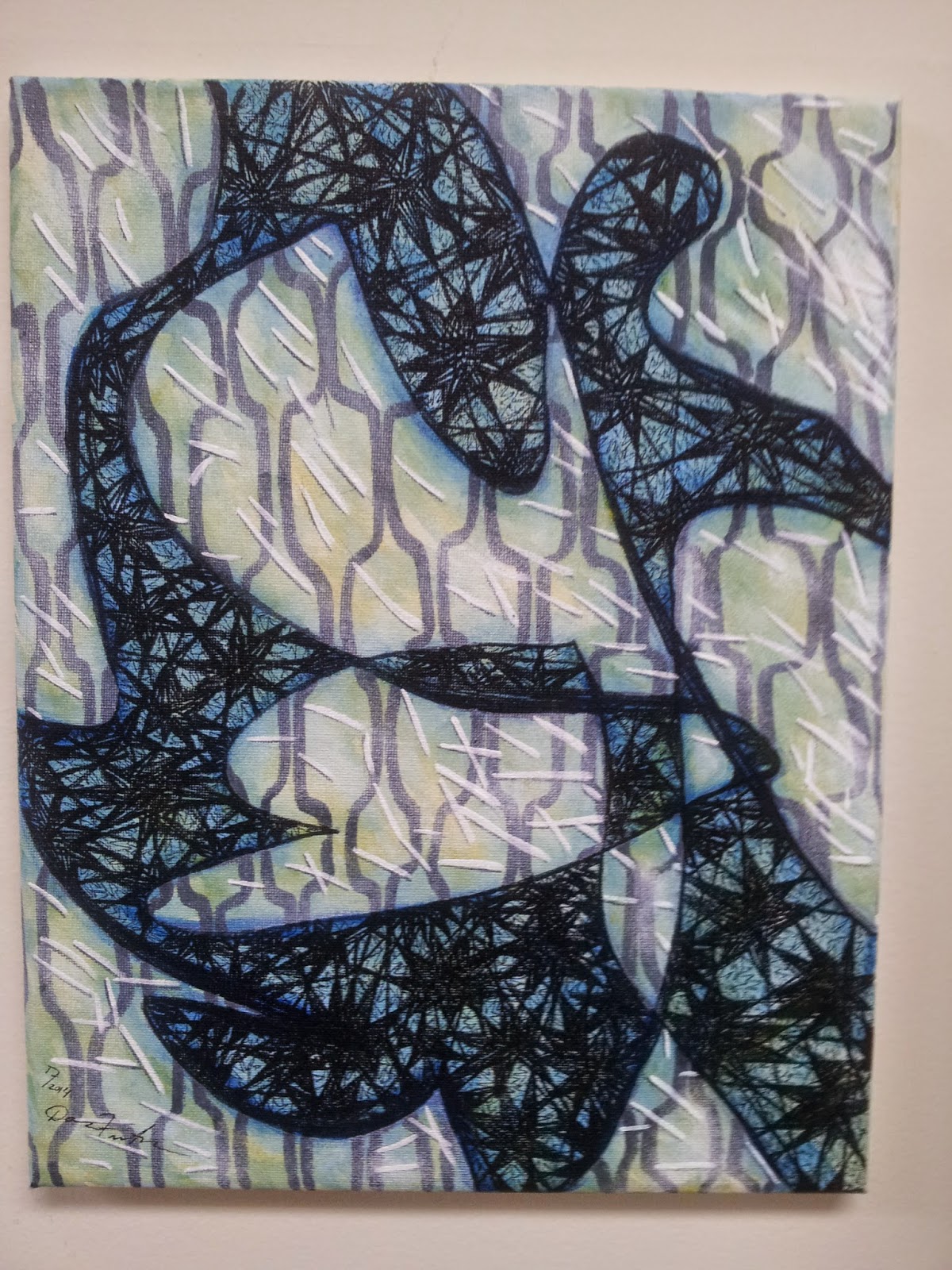 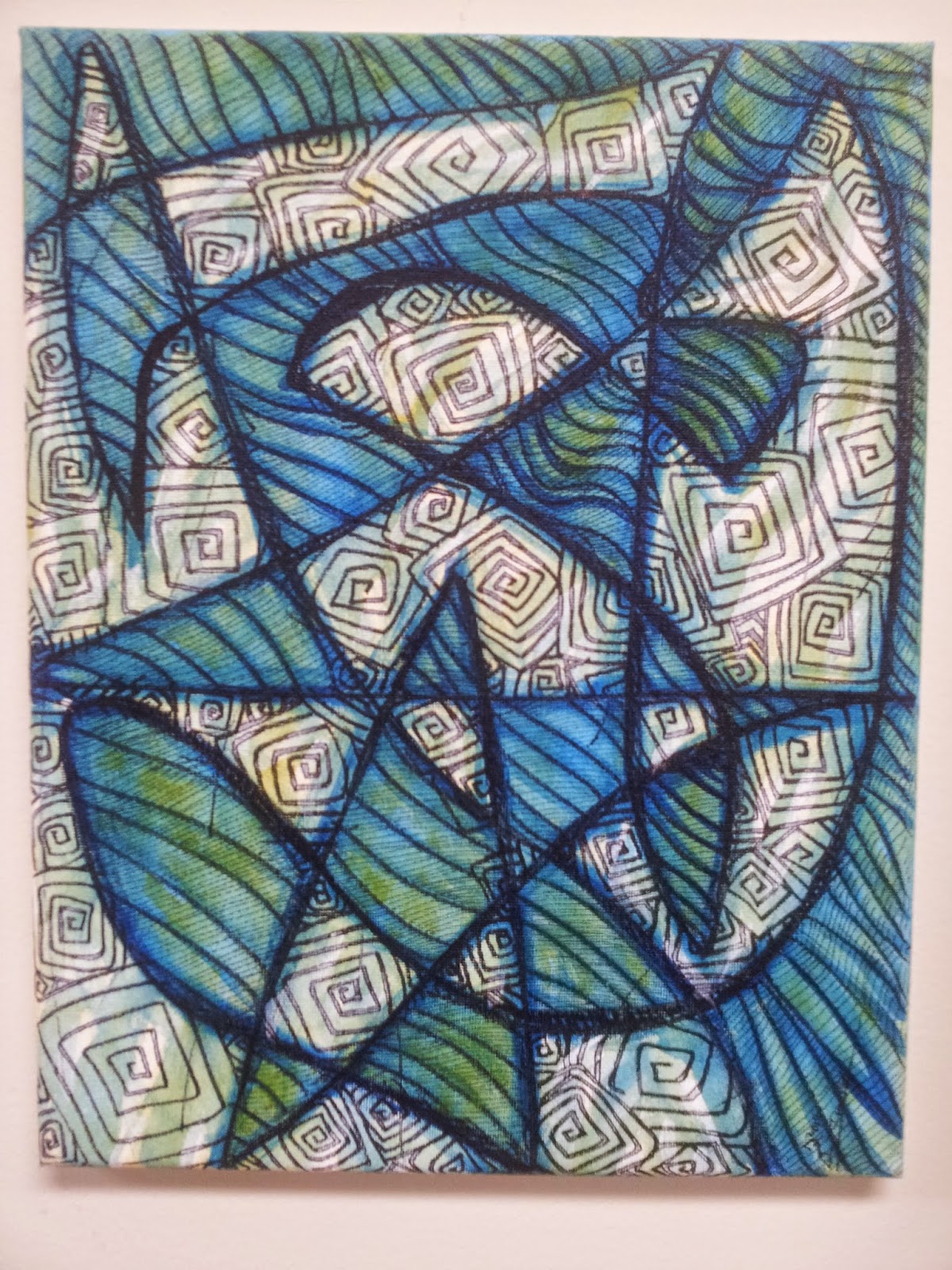 The following five are close to being finished and some of them might be already, but they haven't been signed yet. All 10 pieces are 11x14 inches. 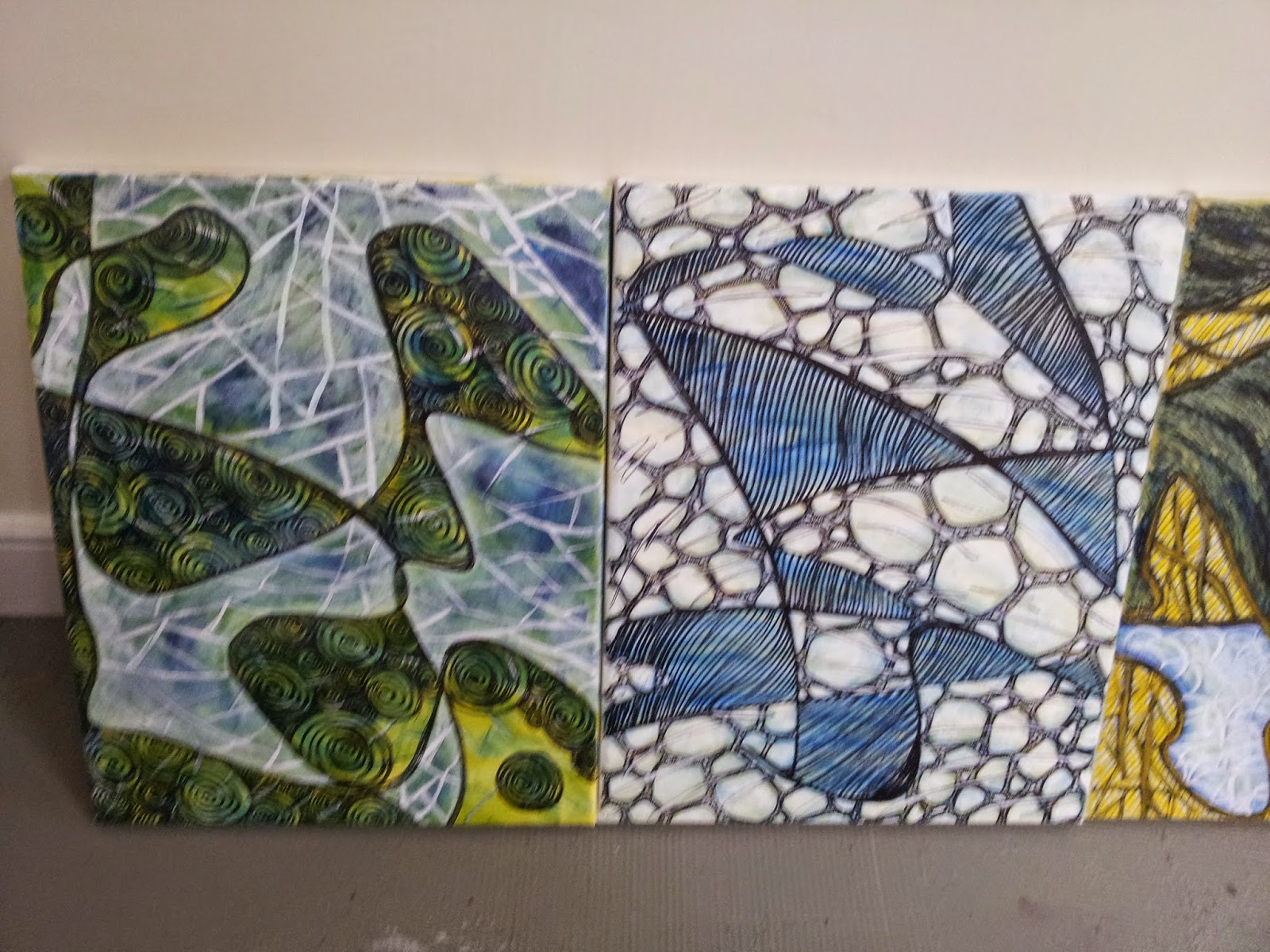 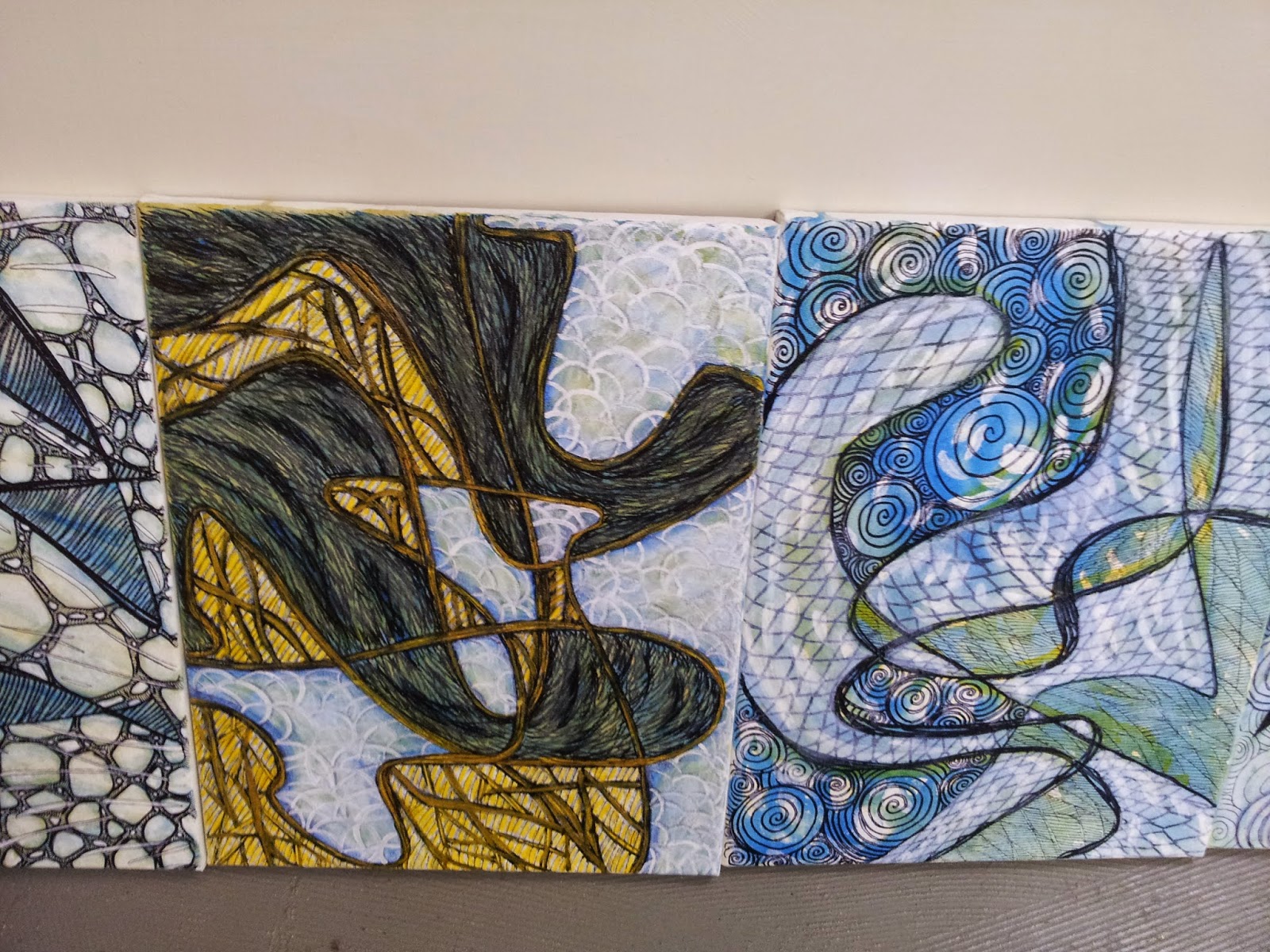 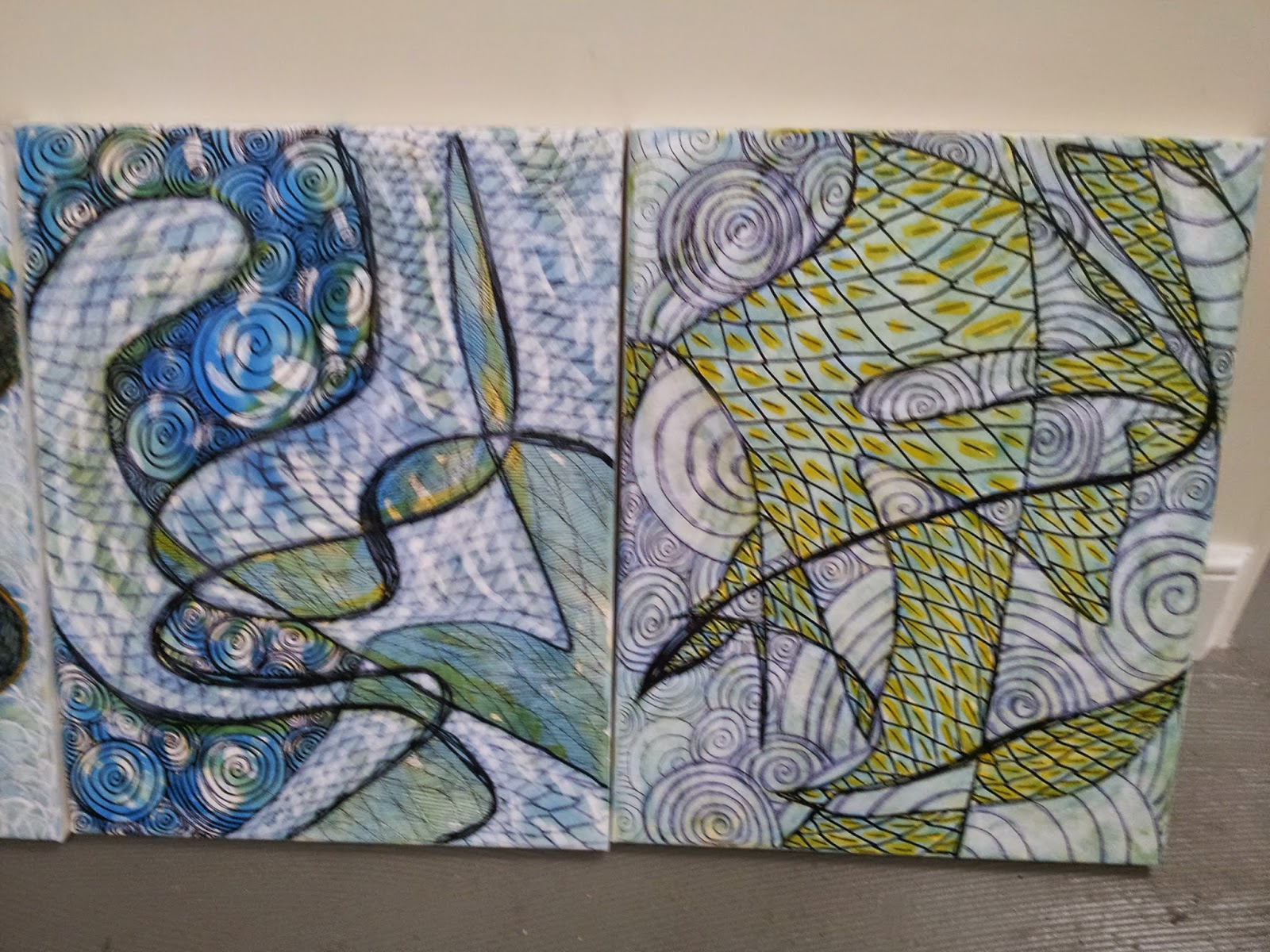